Dumb Jock? Anything but!

The Brain:
Why Athletes Are Geniuses

Neuroscientists have found several ways in which the brains of top-notch athletes seem to function better than those of regular folks.

The qualities that set a great athlete apart from the rest of us lie not just in the muscles and the lungs but also between the ears. That’s because athletes need to make complicated decisions in a flash. One of the most spectacular examples of the athletic brain operating at top speed came in 2001, when the Yankees were in an American League playoff game with the Oakland Athletics. Shortstop Derek Jeter managed to grab an errant throw coming in from right field and then gently tossed the ball to catcher Jorge Posada, who tagged the base runner at home plate. Jeter’s quick decision saved the game—and the series—for the Yankees. To make the play, Jeter had to master both conscious decisions, such as whether to intercept the throw, and unconscious ones. These are the kinds of unthinking thoughts he must make in every second of every game: how much weight to put on a foot, how fast to rotate his wrist as he releases a ball, and so on.

In recent years neuroscientists have begun to catalog some fascinating differences between average brains and the brains of great athletes. By understanding what goes on in athletic heads, researchers hope to understand more about the workings of all brains—those of sports legends and couch potatoes alike.

I love sports in September.  Baseball is boring as hell, and I would rather watch fake NFL games than real anything (by “fake” I mean “pre-season”). 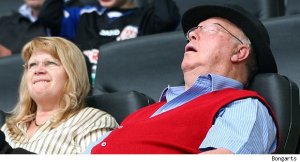 So now everyone is talking up their teams, caught up in stupid holdouts and off-season drama, hoping for what ain’t gonna happen: I’m talking to you Jets fans! You’re not going to the Super Bowl so just shut up already!!!!!!

I digress, the point is everyone has their favorite team and everyone thinks theirs will go 16-0.  Even the Rams have hope.  Luckily I’m here to predict the NFC division winners for the 2010 season.  And I’ll help you not sound like a complete idiot when arguing with your buddies!

The Cowboys will pull out the division because, well just look at their depth chart.  They are stacked at every position on offense and defense.  They have questions at Left Tackle, but there is still young talent there.  And Tony Romo has plenty of targets to hurl to, probably throwing a lot of interceptions along the way, but still winning games.  Sorry Giants fans, but Eli’s broken face shows that their Offensive Line is old and stupid.

This would never have happened to my brother!

If you can’t convert a hand-off, you have major issues.  Ultimately their defense just isn’t what it was that Super Bowl year.

The least creative pick ever, but the obvious one.  The Packers will be quite good, putting up big offensive numbers along the way, and they will end up a wild-card team.  But Minnesota is virtually the same team as last year, minus wide outs Sidney Rice and a healthy Percy Harvin.  They can run, defend the run, and pass the ball.  Their pass defense is not quite up to par with the rest of the team, but it is still not bad.

Yeah, the Saints won the Super Bowl.  But unless there is another hurricane in New Orleans in the next week, the NFL isn’t gonna give the Saints another title.  Oops, my bad.  The NFL doesn’t fix games…

Anyways, the Falcons win because they have the best running game in the division, a young and improving QB in Matt Ryan, and a defense that will no doubt be better than last year.  The Saints are just too weak on defense to have another “magic” season.

Niners fans rejoice that Kurt Warner isn’t Brett Favre and won’t come back from retirement to steal your division!  Thus the 49ers win the West because they have a beast in Frank Gore, also Patrick Willis and a nasty defense.  They do so in spite of QB Alex Smith who is not a #1 overall draft pick, that is clear.  Their weak schedule will be the biggest help for them to end up on top at the end of the year.

The Packers have possibly the best passing attack in the league, but a poor running game and an inconsistent defense.  You could say the same for the Saints. Yeah, I’ll go with that.

Now this is just confusing

Tune in next week and I’ll tell you who plays the Vikings in the Super Bowl on the AFC side!!  Yay!

Oh yeah here’s an ass for you:

YogaDork asks: Are you man enough to do yoga?

[Blogging Yoga] Are You Man Enough to Do Yoga?

Should Men Do Yoga? Yoga Journal’s Buzz Blog re-posits askmen.com’s rather absurd debate of why and why not, to a call for true stories of “how”.  As in, how has yoga positively affected you guys out there? You know, guys who actually practice yoga and aren’t too insecure to admit it.

Oh sure they have an Argument FOR Yoga, but frankly it’s just as annoying as the opposition in its explanation of origins and “benefits” tiptoeing around to be sure not to sound too pansy-fied.  read more

Popular belief would say that marijuana makes its users slothful and ineffective.  Essentially all potheads are lazy and overweight couch potatoes, right? Wrong!  In the wake of the Michael Phelps bong photograph, it is clear that stoners make some of the best athletes.  With this in mind I give you the Top 10 Pothead Athletes of All Time.

Now on the one hand I could rank the athletes based on who are the heaviest smokers, but that is subjective because we cannot really gauge who smoked more than others.  My main criterion here is on-the-field success, while taking into account the fact that the particular athlete regularly smokes marijuana.  Here is my top 10:

The small forward for the Denver Nuggets has a long history of marijuana usage dating back to college, where he won a national title with Syracuse.  If nothing else, his nickname, Melo,  should give away his penchant for smoking (i.e. “mellow”).  A few years back, Melo’s car was being driven by a friend in Denver, and he was pulled over.  The officer found a large bag of weed in the car, allegedly belonging to the Nuggets forward. In true pothead fashion, the driver told the officer he was holding it for a friend.

The veteran running back had a great stint at the University of Texas before being drafted into the NFL by the New Orleans Saints.  Over the years, Williams has been suspended a number of times for marijuana use, and has continually been brought back from suspension. However, a spiritual crisis led to Williams’ departure from the game, and into a Buddhist Temple in South Asia.  A few years and countless joints later, Williams is back in the NFL with the Miami Dolphins.  There is certainly no better place for a recovering drug addict than… Miami!

Vick transformed the quarterback position  with his athleticism and his style.  He dominated football at his high school in Virginia and in college at Virginia Tech, and had great success in the NFL with the Atlanta Falcons, winning multiple playoff games.  During a routine inspection at an airport, Vick was found hiding marijuana in a thermos.  This is quite surprising because we all know how good Michael Vick is at hiding illegal activities.

As a wide receiver coming out of high school, Moss was one of the most highly touted prospects ever, for any sport.  His freakish athletic abilities would have sent him to Florida State if not for multiple incidents of marijuana use (he told a reporter he smoked crack too!).  Randy’s love of weed led him to Marshall University, and eventually to the NFL with the Minnesota Vikings.  Moss remains a top player in the NFL, and consistently smokes in the off-season.  Based on his often lackluster effort on the field, one wonders if he only smokes in the off-season…

*From here, the Top 6 athletes are champions at the professional level:

As a better shot-blocker and rebounder than most big men, and a better shooter than most small guards, Rasheed Wallace is unparalleled in his athletic ability.  Wallace had great success at the University of North Carolina, and has been an all-star in the NBA. He was drafted by the Portland Trailblazers (obvious enough?) and won an NBA title in 2004 with the Detroit Pistons.  A policeman found weed in his car while he was still with the Blazers, riding with fellow NBA player/pothead Damon Stoudemire.  ‘Sheed remains a top player in the league, although NBA scouts note that he tends to be lazy on the court for some odd reason.

Holmes has recently become a big star after his amazing touchdown catch and MVP award from this years Super Bowl.  As a young man in Florida, he admits to having sold marijuana on the streets, and I wonder if he followed Crack Commandment #4? (If you don’t know B.I.G., I feel for you) More recently, Holmes was arrested for marijuana possession in October of 2008.  It’s amazing how quickly we forget such transgressions in favor of Super Bowl highlights, unless you are…

The best swimmer, and perhaps best Olympian of all time, Phelps has brought swimming to the forefront in America. He has become a multi-million dollar empire of t-shirts and autobiographies, and more recently, a notorious pothead.  Phelps is pictured smoking out of a bong at a Carolina college party, and the photo has become widely circulated around the globe.  As a result, Phelps has lost his squeaky-clean image and millions of $ in endorsements.  But the greatest tragedy of all is that by losing his Kellogg’s sponsorship, Phelps has squashed the pothead dream of having a lifetime supply of Frosted Flakes.

Born Lew Alcindor, Kareem is an icon of civil rights, religious freedom, and athletic greatness.  He dominated the NBA with the Milwaukee Bucks, and later won multiple titles with the “Showtime” L.A. Lakers.  Kareem was famously a student of Bruce Lee (he was in Game of Death, see it!), and regularly appears on film and on television.  In his retirement years, Kareem admitted to smoking marijuana throughout his career to relieve pain and stress.  Does that mean Bruce Lee was a pothead too? Well, that’s another list.

2. Arnold Schwarzenegger, Body-Building/Actor/We got to get to the choppa! Now!

Before he saved John Connor, California, and Christmas (Jingle All the Way, don’t see it!), Arnold was dominating the Mr. Olympia competition.  He won multiple titles alongside fellow thespian Lou Ferrigno through hard work– oops! I meant to say steroids.  In the classic documentary Pumping Iron, Schwarzenegger illustrates how a champion bodybuilder prepares for competition: by smoking a doobie.  That’s right, the governor of California is on film smoking a fatty!  Oh, California…

Walton is number one because he embodies the main criteria of this list more than any other athlete.  Not only did he win 88 games in a row with the UCLA Bruins, an NCAA title, and multiple NBA titles with the Trailblazers (coincidence?) and Boston Celtics, but Walton is also the biggest hippie ever! I mean come on, UCLA? In the 70’s?  Please.  Not to mention his tendency to ramble incoherently when asked a simple question, or his love of tie-dye shirts.  Not enough you say?  Dude’s got a tee pee in his backyard.  ‘Nuff said.