“‘India Untouched : To those who claim there is no Castism in India!’

This Documentary is to those who claim that, ‘India has moved on, there is nothing called untouchability or cast-ism in India today’. This is to show them the picture they failed to see till now, to remove the curtain of their eyes. Those who claim that their should not be special rights for those belonging to backward castes..and they should be for poors..’This is how the “Higher Castes” treat a Schedule Caste/Scheduled Tribe no matter what his financial state is’. You talk about equality and a fight with equal stature..where is that equal stature now? If those rights are not fair, which are meant for them to lift them up from their low status, to give them a right to stand at ‘equal’ within a society, then is it fair that those so called ‘Savarnas..Higher Caste’ are pushing them back in a deeper pit of backwardness, of social negligence, underdeveloped, poverty, and a state from where no one even gives a damn what will happen to that particular group of society…Is that Fair? Is it human?

All the facts presented in this video are true and were part of a research project.

And if u r pissed after watching this video, (Which are chances that you will be)..then don’t show your cheapness and low mental state here..tell to ur dad, mom, brothers and specially sisters.

It is the truth about India, and India are a country which believes in humanity, to bring every human being at an equal social and economical status. There is no discrimination against anyone bases upon their particular state. (And by the way..there is no magic wand to change a society..neither overnight laws change it..Society is what people are, what people think, and trust me, a good amount are measures were already taken to ensure that transformation in society).
Enjoy watching the truth! Jai Hind, Jai Bharat, Jai Bheem!”

Posted on January 27, 2013 by na in Films we like, Photography & Web Videos, Politics 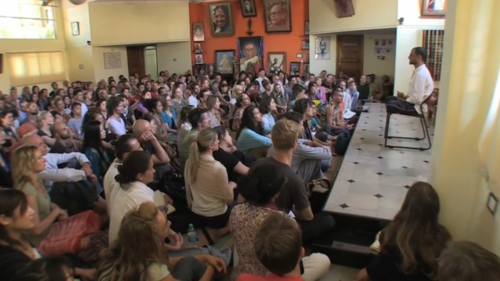 MYSORE MAGIC:  Yoga at the Source
Summary: Magic happens at the source of Ashtanga Yoga in Mysore, India. Thousands from across the planet journey here to deepen their practice. Hear what they say, and enjoy an insider’s view into the Mysore experience.

*A portion of the proceeds from this film go to the Sri K. Pattabhi Jois Charitable Fund.
22 minutes.
$4.99 stream rental.  $9.99 download purchase.

The Men Who Stop Traffic

Sitting across a table from these two softly-spoken, unassuming middle-aged men it’s hard to imagine them picking fights with pimps or collecting court summonses with a shrug of the shoulders; but Stanly KV and Parashu ML have been raiding brothels and private homes to rescue girls, boys and women for the past 20 years. Sometimes with the aid of the police, sometimes in spite of the police, these two quiet men of Mysore have kicked in doors and traded blows with traffickers to help free more than 2,000 victims across southern India.

The pair run Odanadi – meaning “soul mate” – an organisation that provides refuge, counselling, education and rehabilitation for up to 85 victims of trafficking at a time. They have taken in scores of domestic slaves and bonded labourers. They’ve raided 60 brothels and secured the convictions of 137 sex traffickers.

Impressive figures. But then the problem is on a massive scale. The Indian government’s own figures put the amount of people in some way involved in human trafficking – the illegal trade in people for the purposes of slavery, commercial sexual exploitation or forced labour – at around 100 million. Of those, 1.2 million are children.

But this fight did not start as a crusade against seemingly insurmountable odds; instead, they were shamed into it.

In the late 1980s, the two young friends worked together as newspaper journalists so closely their byline read simply ‘Stanly Parashu’. It was while conducting interviews for a piece on Dalits – members of India’s strict hierarchical system born below even the lowest caste – that they were challenged by a woman in the street.

“Her name was Radhamma,” Stanly says. “She was a prostitute, lower in social standing than even Dalits.

“She asked us: ‘What do you do with the story of these poor people? You write about them, get yourselves a good name, but these people get nothing in return. They think you are a saviour but you don’t come back.’ That really pricked our egos,” says Stanly.

Stung by the criticism, the men turned their attention towards one of India’s greatest taboos – prostitution – starting with Radhamma herself.

“Radhamma had been a housewife,” Stanly says. “But her husband took her to Bombay and sold her to a brothel. When he returned home without her he explained to her family she had run off with another man. He then married his wife’s sister.”

After two years Radhamma managed to escape the brothel and return to her village, now with a child fathered by a client. But her family believed her husband’s story and she was cast out, ending up living on the street working as a prostitute, depending on 10 clients a day to earn enough money to live on and send her son to school.

Radhamma had been working the streets for 10 years when Stanly and Parashu met her.

“We wanted to help, to give her financial support, and look after the boy’s education,” says Stanly.

Although they gave her a little cash and arranged for local restaurants to feed her son, Nanjumda, Radhamma found resistance to her change in circumstances too much to bear.

“When we returned a fortnight later, we found her again on the street in the same filthy condition,” Stanly says. “She said: ‘You gave me money but money is not changing my life. No one is accepting me, people are bothering me, police are harassing me.’ ”

Prostitutes coming under the police spotlight are treated with little sympathy.

“Women were dragged by their hair; there were no policewomen in those days,” Parashu says. “The male officers would drag them to the police station half-nude. “No one would ask the authorities about this violation of their human rights. We told the police that these ladies are citizens, human beings. We asked them to treat them humanely.

“We started questioning this ill-treatment and dragged chairs into the offices for the women to sit on instead of being forced to stand in the corner of the police station,” says Parashu. “This started the gap to open between the police and us.” Next page

As seen in the post “The Land of Lungi” from Diary of a White Indian Housewife.

Living Yoga: The Life and Teachings of Swami Satchidananda

View this movie at cultureunplugged.com

Google has stopped collecting images for its Street View service in the southern Indian city of Bangalore after objections from police.

Police in Bangalore said they had security concerns and that Bangalore was a “highly sensitive” area.

Google launched its project to collect high definition images to give Google users 360 degree views of streets only last month in Bangalore.

Cameras mounted on cars and tricycles had been taking pictures in streets across Bangalore.  continue reading at bbc

Shiva Swami is a dog lover with a difference

From the Times of India

Every stray dog is his pet

MYSORE: For many, love for dogs ends at their homes— having it as a pet, feeding varieties of food, giving a royal treatment, teaching their language, etc. All because it is their dog.But businessman Shivakumar, 50, aka Shiva Swami is a dog lover with a difference. A dozen stray dogs are his pets. Every day, he feeds them with bread and biscuits. He has been vaccinating over 100 stray dogs every year for the past five years. Of course, he owns two pugs, an English Mastiff, Labrador and a mastiff puppy.Calling for tolerance among people for stray dogs, he says a dog bites only when it is provoked. “Dogs are scared of people. I feel bad when people throw stones at them on streets. Once you show your love for dog, it remembers it all its life. Such is its love towards humans. That makes it man’s best friend,” he avers. Shivakumar wants people to take the initiative to immunize stray dogs in their neighborhood at veterinary hospitals where it is done for free.

Shivakumar’s love for dogs became deep rooted with his pet Moon, a Great Dane. But his happiness was short lived as Moon died due to an illness when it was 30 months old. Unable to recuperate form the loss, Shivakumar went into depression. He brought another Great Dane and named it New Moon. Though the Dane was a solace for him, he too died young.

Shivakumar’s dogs have participated in many pet shows and won prizes. Shivakumar, who also practices yoga, said he turned to saffron robes 15 years ago for peace of mind.

We Blog the World
http://www.weblogtheworld.com/countries/eastern-asia

India Outside my Window
http://www.indiaoutsidemywindow.com

Unfold Your Own Myth
http://angeliqueyoga.blogspot.com/

From the Heart of Me
http://fromtheheartofme.blogspot.com