Using animation, projections and her own moving shadow, Miwa Matreyek performs a gorgeous, meditative piece about inner and outer discovery. Take a quiet 10 minutes and dive in. With music from Anna Oxygen, Mirah, Caroline Lufkin and Mileece.

Ukraine does have talent

You have to watch this video!
Elephantbeans presents Ukraine’s Got Talent 2009 Winner

To draw the turtle, you have to become the turtle.

Basia Lipska is a full-on ashtangi and a wonderful teacher with a bright, contagious energy. She’s also an artist and brings both worlds together in many different projects. In her Yogart class she encourages the students to “open up” in a different way. The Elephantbeans crew was there, and had a lot of fun sketching.

Food art: is this stuff for real?

You may already have received this, but it is so important, I’m passing it along.

Quincy Jones has started a petition to ask President Obama to appoint a Secretary of the Arts. While many other countries have had Ministers of Art or Culture for centuries, The United States has never
created such a position.

We in the arts need this and the country needs the arts–now more than ever. Please take a moment to sign this important petition and then pass it on to your friends and colleagues.

My generation is under the delusion that we are madly original. Such hubris! Wandering around the spiraling ramp leading through the Guggenheim’s latest exhibit, “The Third Mind,” I was appalled at how little I knew about the history of how Asia infiltrated into the American psyche, impacting art, literature, music, and philosophical concepts. I am teaching yoga, and yet, I have no idea about how yoga has come to be an “acceptable” – and well-known – tradition. This is due, in part, to the fact that yoga is a largely oral tradition. The term is also used in a broad sense to mean a whole host of things that elicit various translations such as union, yoke, really intense physical exercise in a 100 degree room, relaxation, meditation, boring, breathing and movement, India, exotic, etc.  read more

An incredibly sweet rendition of all the things we just love about New York.  As told through LEGOS! 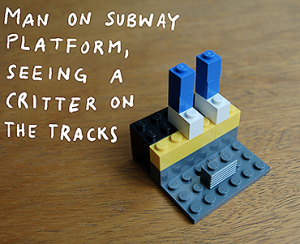 Nothing is Impossible!  An artist creates “Horton Hears a Who”-esque worlds/characters in the eye of a needle, then sells his collected works for 20 million dollars to a private collector…

Mental richness should be worried just a physical richness. Didn’t Christ say that it was like a camel trying to pass through a needle hole, for John Cage to go to heaven? I think it is nice to abandon what you have as much as possible, as many mental possessions as the physical ones, as they clutter your mind. It is nice to maintain poverty of environment, sound, thinking and belief. It is nice to keep oneself small like a grain of rice instead of expanding and make yourself dispensable like paper. See little, hear little, and think little.

Although I suppose the situation is ironic, considering that Jesus said, “It is easier for a camel to go through the eye of a needle, than for a rich man to enter into the kingdom of God” (Matthew 19:24. Similar verses are in Mark 10:25 and Luke 18:25).